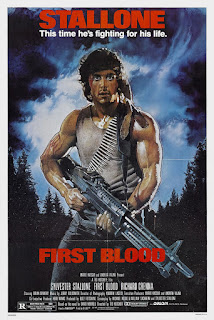 Before mass hysteria within the pop culture realm decided it was a great idea to make fun at Sylvester Stallone's expense, he was a respected actor, and as an audience we saw torture within his eyes and his trembling voice. In 'Rocky' we saw an underdog fighting for his one shot to prove he was strong enough emotionally and physically to go the distance with Apollo Creed. The world saw Stallone as a man with depth, character and integrity. And it's those gifts that he portrayed in the tortured soul of John Rambo in 1982's 'First Blood'. While the 3 sequels of the original 'First Blood' are very violent and very much action films, 'First Blood' will forever be a drama with elements of thriller and action. John Rambo is a young man who has been through so much in such a short amount of time, and has had to do a lot of growing up because of the horrors that he has seen in Vietnam. This is truly a sad story of a man who is just misunderstood, a man who is unfairly treated by narrow minded simpletons.


Here is the run down. John Rambo who is trying to track down his friend from the Vietnam War only to discover he died of Cancer. Clearly devastated he walks into the local town and gets picked up by Sheriff Teasle who warns him that people like him don't belong in his quiet, boring town, so he drives him out of town and leaves him there, yet Rambo just immediately walks back in the direction he just came. Infuriated, Teasle then arrests him. Once at the police station it is pretty damn evident, that these depraved cops have nothing better to do than humiliate, and degrade Rambo which is giving him flashbacks of what he went through in Vietnam. And then finally Rambo snaps, kicking the absolute shit out of the cops in sight and escaping the station and stealing some random guy's motorbike with pure style. Rambo then lures Sheriff Teasle and his cop squad into the forest and then the real hunt begins.

Sylvester Stallone is just perfection as John Rambo. No one could breath life into this character. He is so raw, gritty, broken, and all he wants is some peace in his life. He endured hell on earth while serving in Vietnam, and it's those hellish experiences which have stayed buried deep within his psyche and boiled over into his whole being. The character of John Rambo doesn't talk much for majority of the film, he doesn't need to. Those sad eyes tell a tale of pure sadness and horror, what he has seen, he can never unseen, those horrors don't just live in his nightmares when he sleeps, they are there with him every day, never leaving his mind; all it takes is a trigger. You can see that Stallone definitely can understand the character of John Rambo, and what he is really about. Stallone is definitely one of the most underrated actors out there. He has the ability to make the viewer experience a roller-coaster of emotions, he wants you to live and breathe the character with him, and that explains why I am always a blubbering like a baby whenever I watch 'First Blood'. It physically hurts my chest when I see him reliving all the awful experiences over and over again, 'First Blood' is just way more than any other action movie.

Brian Dennehy portrays the arrogant, narrow minded Sheriff Teasle, who would rather hunt, and kill a Vietnam war Hero than admitting he was wrong in the first place for even approaching him in the beginning and assuming John Rambo was up to no good. You can't help but love Brian Dennehy because you just love to hate Teasle. He is such a scumbag who abuses his power, and no one has ever kicked him off his self appointed pedestal until now. Dennehy was really on the money with this portrayal and he just makes you despise his character regardless of any emotional journey he may go through during the film. If all you want to do is slice his throat open with Rambo's knife whenever you see Teasle on screen, I think he did his job.

Jerry Goldsmith did a magnificent job of producing the musical score for 'First Blood'. The opening music just sets the tone for the film, it conveys the sorrow and bad memories that lie within John Rambo and how how they continue to affect his life on a daily basis. The musical score spoke volumes, and really added raw emotion to the film. Jerry Goldsmith composed a perfect musical score which also proves he was also in tune with the character of John Rambo. Goldsmith brought out Rambo's hell, his experiences, his flashbacks out through the music, and I believe that was a lot of the glue that held the film together.


My favourite scene would have to be the ending, it is just pure honesty and tragedy; a fallen hero struggling to come to terms with what his life is after his hellish ordeal. It is the first time throughout the film, where we learn how he really feels, what he thinks and what stays in his mind. The things people have put him through during and after the Vietnam war have shaped him, and therefore he is having trouble adjusting to normal life. He feels he is still stuck in the war, people will not let him forget what they thought that war was about, and instead of been treated a hero who endured so much pain for his country, he was cast aside, spit on, and banished by society. John Rambo lost his friends to a war which didn't need to happen, and he feels he is going to be paying for it for the rest of his life. When he breaks down crying and falls to the floor, it is incredibly hard to watch, because you feel the pain, you feel like your heart is going to burst out of your chest, it just hurts. It is heartbreaking to see a man so broken up inside, he doesn't know who he is, what his purpose is, so when he does break down you can see that is years of bottled up suppression of frustration, sorrow and anger. John Rambo is just a man, and all he wanted when he walked into that town was something to eat, and they took away a basic right of any human being away from him, just because of the assumption made about what kind of person he was.

'First Blood' is a tragic story of a man trying to get a grip on reality with close minded people standing in his way. Sylvester Stallone is an absolute treat to watch in this, and his portrayal of John Rambo is timeless, and it is this role which will go down as one of cinema's most iconic roles of all times. If you haven't seen 'First Blood', you have been living under a rock, so you need to finish reading this review, grab several Cherry Coke's and you need to buy this film and watch it ASAP. I have found 'First Blood' to be one of those kind of films that I need to watch to have a good cry, now I know majority of women would do that with trash like 'The Notebook', but since I have more male chromosomes than most women, I think it's perfectly acceptable. Now forget what the haters of action films say about Stallone and his portrayal of Rambo, because all they see are the muscles and the explosions. But since the readers of my articles are intelligent life forms you should watch 'First Blood' for the brutality, the depth, the horror and the dark beauty surrounding John Rambo.
Posted by Jawsome at 21:01